We’re all recovering from the second Cape Town Festival of Beer this last weekend having provided 21 beers of the 100 odd available over this busy weekend! The Beer Garden SA served up an awesome selection of beers on behalf of Namibia’s Camelthorn Brewing Company, and local importer Flare Beverages with their range of international brews and the Cape Town public had us running to satisfy their demand.

That's how you pour beer!

CBC provided us with their Weizen Weissbier, Helles unfiltered lager, the Sundowner summer lager, some Fresh weissbier and an exclusive on the last day, the last of their winter dark Bok weissbier (7%). Flare Beverages once again wow’ed the crowds with Belgium’s Liefman’s Fruitesse (that cherry beer ladies!) Duvel, and the Maredsous range. From Germany there was Erdinger and Valentin’s weissbier, from Denmark Carlsberg, Spain’s San Miguel, Phoenix from Mauritius, Singha, Tiger, Tsingtao and Cobra 0.0%. Quite a fare on offer! But then one little lady took our range, and every other beer on offer in her stride and succeeded in tasting and reviewing every brew at the festival!

Freelance travel and beer writer Lucy Corne, originally from the UK but now a part of Cape Town’s character, is one brave lady. This past weekend she put her body, and mind, on the line by  reviewing over 100 beers at South Africa’s largest beer get-together.

Lucy writes for numerous in-flight magazines, Getaway mag, RD Asia and Lonely Planet among others while also tweeting up a storm on the micro blogging platform (@LucyCorne). Having traveled around the world for her job (ja ja, nice try… you call that a job?) she’s had the opportunity to visit microbreweries and vineyards on every continent. Something most big beer belching brutes would dream of! So before looking at her reviews of the 101 beers she quaffed here, we wanted to get her impressions of the festival and the celebrated beers.

Well done on achieving your goal of reviewing over 100 beers in 3 days at the Cape Town Festival of Beer. How were you feeling yesterday?
Lucy: Funnily enough I didn’t actually feel that hungover, but sooo tired and for some reason had twinges in my back. I think I’m getting too old for this!

We think it’s a hell of a feat, no offense, but for someone your size to have been able to put that much beer away. Can you tell us what your strategy was?
Lucy: You know, a lot of people got the wrong idea and thought I was having a pint of each beer – over 30 pints a day – that would be insane! I brought my own tasting glass from home and stuck to a small sample of most of the beers. I did have a few pints on Friday, which I paid for on Saturday morning! I also planned it out to start with light beers and only work up to the Belgians and strong stouts after plenty of dinner.

Lucy Tweets at the Triggerfish stand

And how were you received by the different breweries once they knew of your project?
Lucy: They were fabulous. There was actually a lot of buzz about the challenge on Twitter and most of the guys knew someone was coming to try and taste every beer. I’d get to the stand and they’d be like – oh, are you Lucy Corne? I felt like a pseudo-celebrity for a couple of days.

For the love of beer

I’m sure you have some highlights?
Lucy: I love big, bold beers so was loving the Westmalle from Den Anker’s stand and the Duvel from you guys. I’m also a massive hophead and couldn’t get enough of Triggerfish’s Ocean Potion and was nuts for Devil’s Peak’s IPA. There were also some awesome stouts – Newlands Extra Special helped keep me warm when the wind was howling!

Windy but warm, a good day for beer

Without mentioning specific brands, which beer styles, if any, didn’t you enjoy as much?
Lucy: I’m not a huge lager lover, mainly because I find it too dry and too fizzy for me, though having said that there were a few stand-out lagers, some of them craft brews and a couple from the big guys.

You were sampling beers from massive breweries to home-brews. How would you describe the difference between a big name brand and a microbrewery? Why drink craft beer?
Lucy: I think it’s great to support the little guy and buy local, but having said that at the end of the day people should drink what they enjoy. For me, the craft brewers tend to brew beers that are more to my taste. It’s wonderful to have the range of beers that are now available in South Africa and I think a lot of people tried something new this weekend which is definitely a bonus of having an increasing number of craft breweries.

Would you say that the variety of beer on offer at the CTFofB is on the increase or are more breweries making similar styles of beer?
Lucy: I was here last year for the first CTFoB and there’s definitely been a huge increase in the variety of beers available. I can now get my hop fix or choose from a wide range of what I like to think of as dessert beers – sweeter beers, often with a higher alcohol content, that pair well with cake or chocolate.

Who was missing from the festival that you would’ve liked to have included next year? 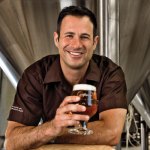 Lucy: I would love to see some of the guys from other provinces there. We did a tour of the breweries around Jo’burg earlier this year and it would be awesome for Cape Town beer lovers to get a taste of what’s going on up there and in KZN. My dream stand would have to be Dogfish Head. Sam Calagione is an absolute genius and I have a little crush on him. Luckily so does my fiance Shawn, though as a homebrewer and beer aficionado I think it’s for a different reason.

Showing how it's done with an Erdinger Weissbier

Do you think the festival should run 2 or 3 days?
Lucy: I don’t think I could have finished the challenge in two! Seriously though, I enjoyed it as a three-day event. It was a little quiet on Sunday but there was a great chilled atmosphere with people just lounging, listening to the bands and drinking great beer.

And your impression of how the festival was organised?
Lucy: It seemed really well organised. There was a great range of food, something for kids to do and the way the ticketing and bracelet thing worked was excellent. It would be great to see a few interactive stands, like you might find at a carnival, for those who are less about the beer. Everyone loves games! Also, I’d like to see some of that waterless hand sanitizer stuff in the loos (which the staff kept impressively clean and I’d like to give a huge shout out to them).

Which beer that you reviewed would you want to have with you if you were stranded on a desert island?
Lucy: Ooh, that is a tough question, but it would have to be Triggerfish’s Ocean Potion. I could drink it all day and it has the perfect desert island name! Plus the hops would keep it fresh until someone came to rescue me.

Read all 101 of Lucy’s tweets here and get an impression of what wonderful beers are out there waiting to be discovered!